Busy Ashton Road (a 20 mph road from the A3029) bends eastward into the commercial area of North Street, close to a well-used park. On the bend, immediately adjacent to a park entrance, Frayne Street brings one-way traffic from the north west, and allows cycles to travel in the opposite direction towards Cumberland Basin. Coronation Road has two way traffic on the north east side.

A recently installed calming measure has narrowed the road on the bend, as shown in the picture. The irregular shape of the road that results has made the turn into Coronation Road awkward for cyclists and, as can be seen from the lower half of the picture, some cyclists take ad hoc routes to avoid the complication. Buses and large lorries also use the route into North Street and most vehicles take the bend at about 30 mph, despite the speed restriction.

As a route for cyclists, there could be a continuous segregated lane alongside the park (perhaps shaving a metre from the park itself, crossing Frayne Road with priority and following Coronation Road eastbound. A large number of school children use the route along the park every day but only a very few use a bicycle. 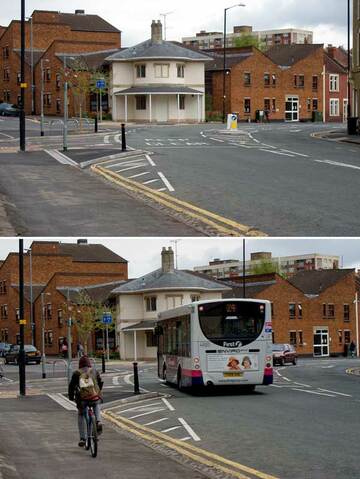