On the eastern approach to Clifton Suspension Bridge the narrow road curves past a pedestrian refuge next to a toilet block. The short cycle lane that had started as approximately 1.2 metres wide narrows to approximately 0.9 metres at the refuge. More than half of the cycle lane at that point is paved with uneven cobbles unsuitable for cycling, especially on a bend. The traffic lane (approx 3.2 metres) is too narrow for a car and a bicycle to pass together. The cycle lane, in effect, is encouraging inexperienced cyclists to adopt a vulnerable road position and to cycle on an unsuitable surface. 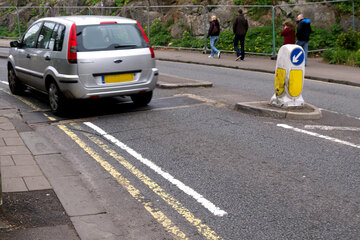